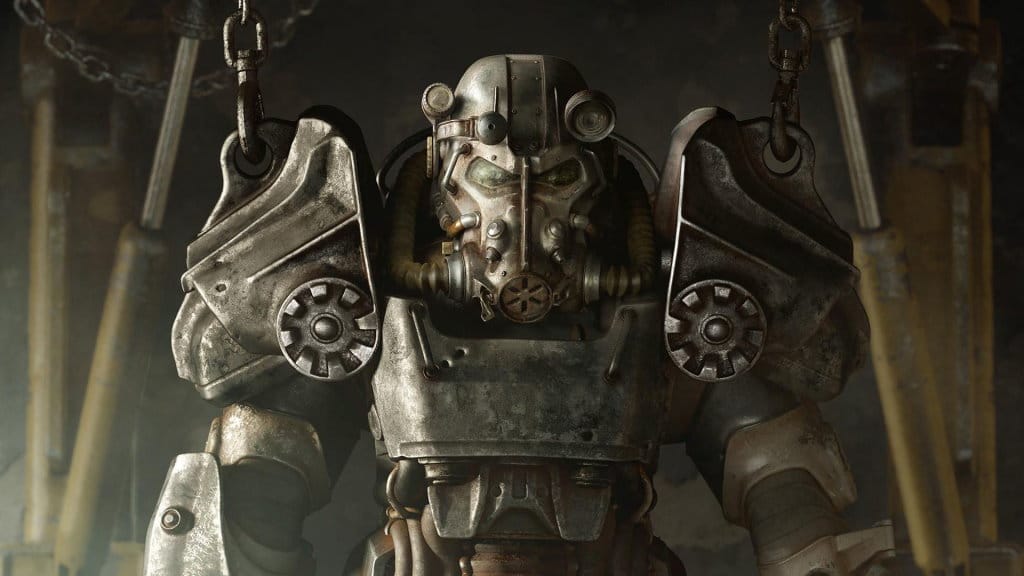 We may all know (and maybe love) Fallout 4 mainly because of its vast open-world that combines the strong reminiscences of both Fallout 3 and Fallout: New Vegas.
Set in a post-apocalyptic Massachusetts, the fourth installment of the Fallout series was released in 2015 and takes you through the eyes of the Sole Survivor of Vault 111 as he fights to survive the aftermath of a nuclear bomb that has created super mutants, mole rats, mirelurks, and much more.

If anything, traveling for nearly 60 hours through Bethesda’s invention of wasteland-Boston should have left fans of role-playing games (RPG) yearning for more.

So, whether you’re seeking a new planet to annihilate and call home or a more challenging yet immersive universe, we’ve got you covered with our list of the best 15, new and classic, games like Fallout 4. Plus, user ratings from the Internet Game Database (IGDB).

Read on to find out more and get your console ready.

Far out in the solar system, a scientist and a janitor named Pippin run amok through the empty halls of an abandoned colony ship. They introduce the story of the game, paving the way for a light-hearted and quirky tone.

Essentially, you’re flying to different planets where you can collect friends and enemies alike, battle your way through various conflicts, and leverage your laser gun weapons. Fans of Fallout and retro sci-fi can both enjoy this award-winning single-player RPG game developed by Obsidian and our most recent-released picks.

Metro: Last Light, or Metro 2034, is the sequel to Metro 2033, and takes place in a post-apocalyptic world and in first-person. You must guide the character Artyom into going after his friends, defeating killer mutants, and fighting with villainous factions.

Most reviewers praise the game for its storyline and visual effects but are opposed to the game’s dull sequences and character animations. The game presents a unique atmosphere and will appear as a bold and captivating post-apocalyptic journey to most.

The developer, 4A Games, improved themselves through Last Light, as they focused more on the gunplay and ensured stealth is easier to let more players play the game. Unlike Fallout, Last Light is very linear. However, it still has a similar feel to Fallout.

With an interesting storyline set on a wasteland planet called Pandora, Borderlands 2 can be very fun to play for most, even non-FPS gamers. You deal with crazy oddballs and humorous villains in almost a Mad-Max-like environment, encounter funny dialogue and experience an uncanny cartoon style.

Although, sometimes it may feel like the game is repetitive. This is especially so when you’re on a new quest to capture cryptic items to unravel the plot and deal with inflated money that you find out is useless later in the game. Overall, Borderlands 2 is easy to play and most players can enjoy exploring gameplay and new styles through different characters.

Dubbed as the “inspiration” for the Fallout series, and as the first RPG game to permit gamers to split groups for tactical planning, Wasteland 2 can feel very similar to Fallout and Fallout 2. However, this game contains more focus on fighting.

The game also carries out well-written dialogue through an all-too-familiar setting and story that is still somewhat enjoyable. Thrown in are some insane monks following a nuclear warhead, a highly civilized society, and more. Overall, if you donated to the game’s successful Kickstarter funding, then it may be worth the experience for you to play.

Developed by a team that includes the game creators of Hitman and PAYDAY, MYZ: Road to Eden can also be very similar to Fallout, XCOM, and Wasteland 2. However, some may argue that the RPG element of stealth, base, and character-building can be slightly superficial, such as overlapping skills between characters.

Plus, the game may be more or less challenging for some and can last up to 20 hours for some players, making it relatively short. In the end, MYZ: Road to Eden can be a great introductory experience to turn-based strategy—a genre that some may underestimate.

From wrecking sandstorms to an unforgiving wasteland full of dark secrets, to optional side quests to take on, death races, story missions, and violent fights—Mad Max the video game may have it all for a single-player game.

Its story is not as compelling as the 2015 movie Fury Road but the high-quality game can be immensely fun with the intensely fast driving through the desert while battling scarecrows and leveling up your character.

So, for those of you who enjoyed the movie, open-world sandbox games, or are seeking an alternative to MGSV, then Mad Max is a solid game that is worth your time.

Only a few games nowadays contain that pure and innovative gameplay as the S.T.A.L.K.E.R.: Shadow of Chernobyl does. In fact, nothing else has replicated it since. Whether you’re a true hunter in reality or not, this first edition of the franchise is atmospheric while frightening and altogether unique.

Not exactly Oblivion or Fallout, but its realism can make you feel as if you’re actually lugging any weapon on an open battlefield. Plus, eerie sound effects, strange terrains, and lurking shadows all create a sense of mystery.

If you enjoy capturing your hunter-gatherer instinct and the challenge of a complex survival-based shooter with dead-on realistic physics and adrenaline-pumping horror, then the entire S.T.A.L.K.E.R franchise may be your new home.

RPG and survival-horror fans may enjoy Dying Light, which is often compared with Dead Island games since they both share the same developers. Yet, Dying Light has more to offer due to its unique parkour and scenic open-world. The types of zombies can vary in strengths and weaknesses while adding on a fun element of danger.

City design may come off as repetitive and weapons can also be seen as over the top and extreme but very handy in this zombie-butchering wonderland. You can further expect a mediocre beginning but as you keep on unlocking skills and progressing through the game, Dying Light may become addicting.

As a largely criticized game, Rage fails to meet the expectations of many PC gamers. The sound design is possibly its best suit, plus the superb shotgun blasts, well-designed animation, and original art direction. However, gear up for actual ultra-blurry textures which occur for a microsecond but they degrade the realism of Rage.

Rage is linear through and through, and relatively high-priced for a console game. If anything, the developers should improve on making the game more PC-compatible, as Rage is not as optimized as other games and may crash once launched.

Talk about immersive video game storytelling, especially for sci-fi lovers. Mass Effect is one of a kind within its own genre due to its mixture of RPG, action, and choice elements. Initially, you may need more time to adjust to the game since the combat is awkward and the cover system doesn’t get any better.

After the learning curve, the storyline is truly out of this world. Whether you’re exploring countless planets and galaxies or interacting with charismatic characters, Mass Effect can be addicting gameplay. Plus, there’s great voice-acting, graphics, replay value, and never a dull moment in world exploration.

From the get-go, you’ll likely realize that you’re in for a dark and remorseless mission of survival and your only sympathy will be for the main characters, Joe and Ellie. They each have a strong premise and as you witness first-hand the growth of their love for one another, you may also fall for them.

However, there could be the occasional glitch but so small that they can be forgotten at times, especially the brilliant storyline and stunning graphics. Overall, if you like story-driven games with top-notch voice-acting and immersive gameplay, then The Last of Us may be for you.

Days Gone is an adventure RPG like Fallout. In this game, you have to survive in an open world full of zombies, called freaks, and crazy people, which players are free to explore on their own two wheels or in the saddle of a trusty motorcycle. The events of the game unfold two years after the global pandemic that destroyed the old world, turning most of humanity into freaks. The protagonist, a former criminal named Deacon St. John, wanders the world in search of adventure.

Whether on console or PC, the graphics in Horizon Zero Dawn may leave you in awe for it’s a world you might want to get lost in— my mistake or on purpose. The open-world sci-fi game touches on everything you can think of; visuals, audio, and addictive combat system, and an unforgettable story.

Side quests appear and can be completed relatively quickly. It’s common for one to assume right off the bat that such a game will be repetitive. Yet, within a few hours, you’ll likely realize the complex open world is full of vast activities and rich discoveries, even almost reminiscent of The Last of Us.

Depending on what you’re seeking in video games that are like Fallout 4, Far Cry 5 may have just as great of gameplay. Although the generic or predictable story of this fifth edition in the Far Cry series could be improved some more, as well as the weapon variety and character developments.

However, the way the game unfolds can feel like a true revelation. Far Cry 5 also contains several philosophical engagements, making you think twice before simply shooting others while driving around. Overall, this fifth version is not really a far cry from its predecessors, mainly due to a weak storyline.

With unexpected twists and turns at every corner, thus refreshing the traditional FPS style of games, BioShock can be very gravitating in terms of storytelling and high-quality graphics. The complete BioShock series can be replayed as it is beautiful through and through, such as the classic retro atmosphere combined with the uncanny feeling of fear.

Even if the conclusion may leave you guessing, the combat offers a spectacular amount of variety and a multitude of ways to kill off enemies. It’s important to note that the game is not an RPG, as it says on Steam.

From secret dungeons to hidden caves, giant spiders, dragons, yetis, and much more, Skyrim astounded many gamers in 2011 and still does to this day because the epic game contains dozens of hours of fun and engaging content.

If you have a strong love for handhelds on the go, then this game port may suit you. Unfortunately, the pocket PC might not be strong enough to provide the optimal gaming experience and the controls are not always easy to manage.

Overall, Skyrim on Switch sets out what it needs to do but doesn’t have such high expectations. Yet, all forgivable for some users as you experience its beloved gameplay or an open world of unique twists that are all worth revisiting from time and time again.

There you have it, legions of fellow RPG fans! We briefly reviewed the best 15 games like Fallout 4 in hopes you’re ready to take on the next shooter role, let it be in a post-apocalyptic world or empty spaceship.