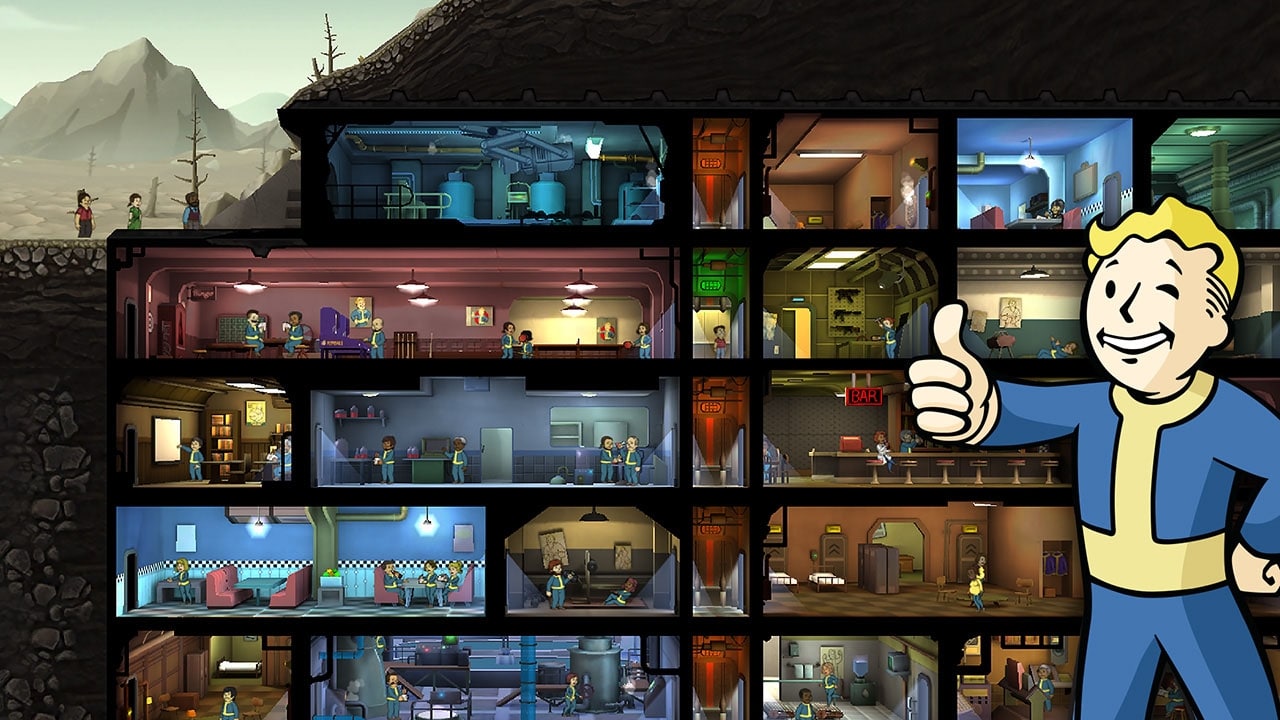 Back in 1997, Fallout exploded on the video game scene. With themes of post-apocalyptic atomic-age futurism meets retro 1950s music and stylings, it’s easy to understand the series’ allure and relevance.

New Fallout versions are produced consistently, along with similar games appealing to fans of the game.

Fallout Shelter was the first free-to-play simulation from the franchise. It involves the building and managing a Vault as an Overseer who must attend to the needs of the Vault’s dwellers and rescue citizens from the wasteland.

The game and its concept were well-received. But what to do once you’ve built the ultimate vault? Here are eight games like Fallout Shelter for fans of the series to enjoy.

Like Fallout Shelter, Sheltered is a role-playing game set in a hostile post-apocalyptic world. In this game, you have to ensure your family and pet can survive the brutal conditions of a nuclear holocaust. To do this, you’ll need to gather supplies and make your shelter comfortable amid the circumstances to keep your family’s health and happiness stats high.

This War of Mine

This War of Mine makes wartime survival not only for the fittest but the smartest and most strategic. Instead of soldiers with sophisticated techniques and training, the player is responsible for a group of civilians surviving against the odds.

During the day, armed assassins prevent the residents from going outside, so habitat must be maintained and survivors cared for. At nightfall, the civilians must risk venturing out of their hideout to pick up vital supplies. Not everyone will survive, and sometimes individuals must be sacrificed for the greater good.

Want to learn how to build an empire of high-rise buildings that will rival the Manhattan skyline? In Project Highrise, players must strategize to master the interlocking systems for each project.

It’s an urban planning simulation game where developers must build their establishments according to the needs and desires of the citizens. You must ensure ease of transportation and convenience for office workers while managing your budget and dealing with the unexpected.

In this simulator game launched in 2019 exclusively for PC (Microsoft Windows), the player is in charge of a space colony. Nothing is included, not even the air you breathe!

Residents of the colony require food, oxygen, and warmth to survive, plus more to thrive in the bizarre, hostile, and unpredictable environment. The quirky cartoon-like characters and interesting scenarios make this simulator game a smash hit.

If Fallout Shelter and Project Highrise had a game child, it would look a lot like Endzone – A World Apart. It’s post-apocalyptic urban planning. Citizens have to rebuild a city from the rubble following a nuclear disaster.

City planning and construction are challenging under the best circumstances, but this group of civilians contends with setbacks from toxic rain, radiation, droughts, and sandstorms.

The Apocalypse has arrived. Who will survive Judgement Day? In Judgement: Apocalypse Survival Simulation, survivors have to deal with demons as they try to build and defend their colonies after the world’s demise. Players must strategize, scavenge, and perform occult rituals to survive this hell on Earth.

In this mobile post-apocalypse survival game, players must stay alive while building a home, exploring, hunting, and upgrading their weapons. Did we mention that it’s a zombie apocalypse? It’s a dog-eat-dog world where you have to kill or be killed by flesh-eating monsters. Speaking of dogs, this game features a canine companion.

Rimworld is an imaginative game that transports the player to a space colony. An AI narrator guides the story. It follows three survivors as they build a colony on the outer rim of the galaxy – the Wild West of space.

Rimworld is a compelling sci-fi fantasy simulator game with an epicness that will appeal to Fallout Shelter fans, though the genres are outwardly quite different. Survival and building a colony are at the core of both games, but Rimworld explores the spacecraft crash survivors’ psychology and interpersonal relationships.

Fallout Shelter was the first free-to-play simulation from the franchise. It involves the building and managing a Vault as an Overseer who must attend to the needs of the Vault's dwellers and rescue citizens from the wasteland. The game and its concept were well-received. But what to do once you’ve built the ultimate vault? Here are eight games like Fallout Shelter for fans of the series to enjoy.